Dave’s Pumpkin Patch is one of West Sac’s best kept secrets, in my opinion.

For 11 months out of the year it is known as Vierra Farms, a family farm/produce stand/wedding venue. (I was there a lot when corn was ripe –  fresh picked corn for $1 an ear? Yes please.)

Then in October, they bring in the pony rides, turn the corn field into a haunted maze, set up a photo booth and the farm transforms into a little pumpkin carnival.

Dave’s Pumpkin Patch is celebrating their 25th anniversary this year. 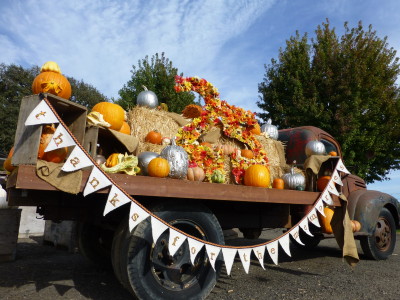 Some of the things there, you wouldn’t think were a big deal – like the hay bale pyramid – but according to Taylor (the nice girl at the entrance) some families make it a tradition to take their annual family photo on the pyramid.

When I was there today, the most popular attraction was a sandbox filled with corn kernels. Who’d have thought?

It’s not on their website, but they also had a sign for a pancake breakfast, Halloween costume contest, and three days of safe trick-or-treating. Oh! And family movie nights, they have a giant movie screen set up. And some other stuff, which I’ve forgotten.

There’s basically no reason to not go.

There was a row of meat smokers smoking away in the little food court area, and a whole lawn of picnic tables for families who want to make an afternoon of it.

Basically, this is not one of the pumpkin patches where you go, you get a pumpkin, and you leave. Here, you show up, the kids run around and climb on stuff, you have a picnic, and maybe buy a pumpkin and some local produce.

Yup. That’s how we do “Pumpkin Patch” in West Sac.

PS – Dave’s Pumpkin Patch also offers field trips and group packages. And they are staying open until November 2, because they have a family camping thing the weekend after Halloween.